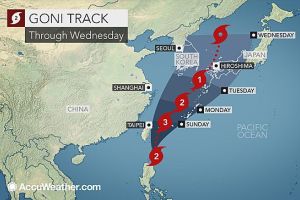 MANILA, Aug. 21 (Xinhua) — At least four people died on Friday and more than 700 people have been displaced due to typhoon Goni (local name Ineng), police and civil defense officials said.

Two of the fatalities were burred by a landslide in north Philippine province of Benguet, said Cordillera regional police spokesperson Cherry Fajardo.

Two people were reported swept by floodwaters along Abra river in Bucay, Abra and one of them was rescued while the other remains missing, said Uy.

In Batanes, Efren Cabugan was injured when he was hit by a fallen tree branch in Uyugan town, said Office of Civil Defense Cagayan Valley director Norma Talosig.