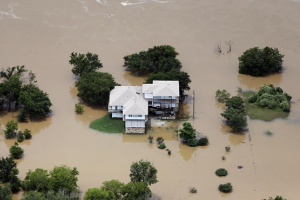 We know that as humans emit greenhouse gases into the atmosphere, it causes the Earth to warm. But it also causes other climate changes that are less obvious. In some instances, it makes areas wetter (because there is more moisture in the air as temperature increases).

This can lead to increased flooding. In other instances, it speeds evaporation so that droughts can set in more quickly and deeply. While it would appear these affects would offset each other, in reality more droughts or floods occur depending on where you are located.

In some instances, areas are experiencing more severe droughts and more flooding as the weather systems swing from dry to wet quickly. Added to this is the fact that ocean temperatures have an enormous influence on weather.

As an example, an El Niño, which is the appearance of a warm water pool in the Pacific Ocean, can influence weather across the globe. Human-caused warming of the oceans adds to the El Niño cycles, which in turn affect the atmosphere. The real scientific question is, do human greenhouse gases influence a specific flood or drought event? A growing body of science is finding that the answer to this question is yes.

A paper just published in Geophysical Research Letters looked at the May 2015 floods in Texas and Oklahoma in the USA, which resulted from the wettest single month on record in both states. The lead author, Dr. Wang from Utah State and his colleagues examined the role of strengthened El Niño teleconnections on the flood event. Before getting into their conclusions, a little background is important.

This process has large global consequences. First, when the ocean is in the warm El Niño phase, global surface temperatures rise temporarily. When in the La Niña phase, the temperatures temporarily drop. These short-term rises and falls last just a year or so and are superimposed on a long-term temperature increase from greenhouse gases. The cycle also has big implications for rainfall patterns around the globe.

Dr. Wang and his authors recognized that in a warming world, the way El Niño intensifies rainfall patterns would change. That is, today’s El Niños may be more potent than prior El Niños. In particular, they compared the El Niño influence from 1948–1980 with the influence after 1980. They used a wide collection of measurements and modeling tools and concluded.

The record precipitation that occurred over Texas and Oklahoma during the month of May 2015 was the results of a series of climate interactions and anomalies. Foremost is the role that El Niño played. A developing ENSO (El Niño/Southern Oscillation) has a tendency to increase spring precipitation over the southern Great Plains and this effect was found to have intensified since 1980; this intensification was concomitant with a warmer atmosphere due to anthropogenic (human) greenhouse gases.

Specifically, the intensified ENSO teleconnection appears to be triggered by enhanced latent heat in the equatorial central Pacific, and is associated with a broad sea surface temperature warming in the tropics. In essence, there was a detectable effect of anthropogenic global warming in the teleconnection and moisture transport leading to Mays 2015’s high precipitation.

Also worth noting is the potential for predicting extreme events like the Texas floods. ENSO impacts are one of the few climate anomalies forecasters today have a better handle of. This paper notes that the chance for Texas and Oklahoma to experience an abnormally wet season in May was predicted as early as in March, according to computer models used by the Climate Prediction Center. What remains challenging is how scientists can anticipate the extraordinary magnitude of precipitation as fell in Texas and, if they do see it, how can the right information reach people.

The detection of human influence on extreme weather is a rapidly maturing field and each year we are finding more and more evidence of the connections. The corollary is that without efforts to reduce greenhouse gases, we can expect more frequent and intense extreme weather in the future.