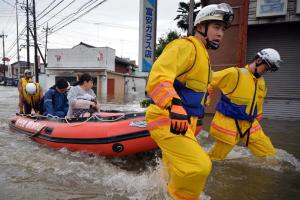 Search teams using boats and helicopters resumed looking on Saturday for at least 16 people still missing after torrential rain and flooding across Japan this week, while thousands waited to return to their homes as waters slowly receded.

Floods swept houses off their foundations and crushed others under landslides after rivers burst their banks following days of rain. Kyodo News agency said three people were killed and 27 injured in the floods.

Reuters photographers saw a helicopter rescue a local resident from an area flooded by the Kinugawa river as soldiers in boats paddled along streets that had been turned into rivers, searching for survivors.

In the worst-hit city of Joso, northern Japan, there were still 15 people missing, Kyodo reported. About 4,800 residents of the city were still waiting to return home, it said.

Flood waters were slowly retreating in the city but the residents could spend days before returning to their homes as the floods had damaged a wide area and it remain uncertain when electricity and other utilities will be restored.

One person was missing in Miyagi prefecture, whose coastline was ravaged by the March 11, 2011, earthquake and tsunami that killed nearly 20,000.

In flood-affected regions in eastern and northern Japan, at least 8,600 people fled their homes and were staying at public facilities and makeshift shelters on Friday night, Asahi newspaper reported.

It was believed at one point that as many as 100,000 had been forced to evacuate.