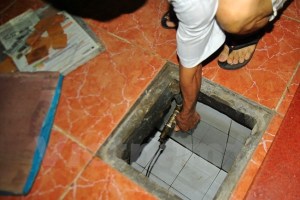 The Ministry of Natural Resources and the Environment in 2011 released a report about the underground water monitoring results in the north, south and Central Highlands, warning that underground water level and water quality was declining.

In the northern delta, the underground water level was found falling dramatically in Mai Dich area of Cau Giay District in Hanoi.

In the dry season, 7/7 water samples showed ammonia concentrations much higher than the permitted levels.

More recently, when naming the provinces and cities most seriously contaminated with arsenic, Dr. Le Van Cat from the Vietnam Chemistry Institute said the worst situation was seen in Hanoi.

Cat said the arsenic concentration was tens of times higher than the permitted level in many areas.

The water pollution was found in most of the small household-owned water wells, while there were about 5 million such self-dug water wells in the city.

Meanwhile, a report from Unicef said the most serious pollution was found in the southern part of Hanoi, especially in Hai Ba Trung and Thanh Tri districts.

Scientists attribute the high concentration of arsenic in underground water to the overuse of pesticide, coal burning and other activities.

In July 2014, the local residents in My Dinh II residential quarter of Nam Tu Liem district shouted for help as they had to use unsafe water provided by HUDS Company which was found as having arsenic concentration two times higher than the permitted level for a long time.

Nguyen Van Manh, deputy director of HUDS, then said in the rainy season, the arsenic concentration often went up because the surface water was absorbed into the earth.

The residents only stopped complaining when they later could began using the clean water provided by Viwaco.

The terrain is lower in the southern and southeastern parts of the city. these are the areas where surface water brings dirt, which is absorbed into the earth and taints the underground water.